Looks like I’ve been busy this April, so thought I’d do a little recap.

I’ve mostly been talking Plus Size it seems.

However I started the month on a more serious note, and talked about my experience of being stalked after it was revealed the Jamie Dornan (of Fifty Shades of Grey fame) had stalked a member of the public in order to get into his role in The Fall.

It doesn’t matter if Jamie Dornan didn’t have malicious motives for stalking that woman, she had no way of knowing that. I hope she was never aware of being followed, but even if she wasn’t it doesn’t make what he did ok. He was not entitled to use her, without her consent, for his own entertainment.

One of the things that made me realise there was more to cover was the comments I got after posting it – or more specifically the comments I didn’t get.

The of course the campaign to #DropThePlus campaign started, and I had a few things to say about that. Four blog posts and a Storify in fact. The first blog post was in March, but here’s a few relevant ones from April.

I agree with Tess wholeheartedly here. Yes, right now the word “fat” is used as an insult more than anything, and that makes it hurtful. No debate there. But what Tess was saying is that the words is still, underneath all the stigma, a descriptive term. Like “petite”, or “red haired”, or “blue eyed”. It’s the stigma that is problematic, not the word.

#DropThePlus – please listen instead of misrepresenting our views

I know from my Twitter feed that many plus size women, and by that I mean the ones who have to use the plus size fashion brands, feel they aren’t being listened to over this. They feel that women who are in that inbetween size, where they’d be considered plus size for models but average in most stores, are talking about#DropThePlus with little regard for those who are considered plus size by the high street too.

This last one isn’t specifically about #DropThePlus, but it is definitely linked to it (this one comes with an eating disorder trigger warning)

The Diet Industry and triggers

I cannot have been the only person to buy into the message that dieting/weight loss would buy happiness, and the way it is marketed to you is all about reinforcing that message.

I revisited Eating Disorders and weight issues in a few more blogs too. Both The Healthy Fattie and “Well you look fine now” tackled being plus size alongside health and disability.

On a more positive note (and in direct contrast to #DropThePlus) I talked about #WeAreTheThey, a celebration of all plus size women and body positivity in general.

Sisterhood thanks to #PlusSizeWars and #WeAreTheThey

I don’t even feel like I’ve done last night justice, there just aren’t the words. There were a few times yesterday evening where I could have cried with joy.

#WeAreTheThey and I’ll wear tight clothing if I want to

I don’t want to be relegated to oversized baggy clothes as some kind of punishment for daring to exist outside of a narrow definition of beauty.

There were loads more posts, but I want to leave you with this one, my favourite OOTD post of the month.

While I was getting photos for this OOTD post, I ended up taking this one. And I looked at it and thought,  “you know what? Fuck those nasty men earlier, fuck all the fat hating idiots online, I look good!” Yes, I’m fat. Yes, I’m obese. Yes, I’m very much plus size. And yes, I’ve even got the utter gall to be an unhealthy fattie. But I look good, not in spite of my weight, weight and attractiveness aren’t mutually exclusive. 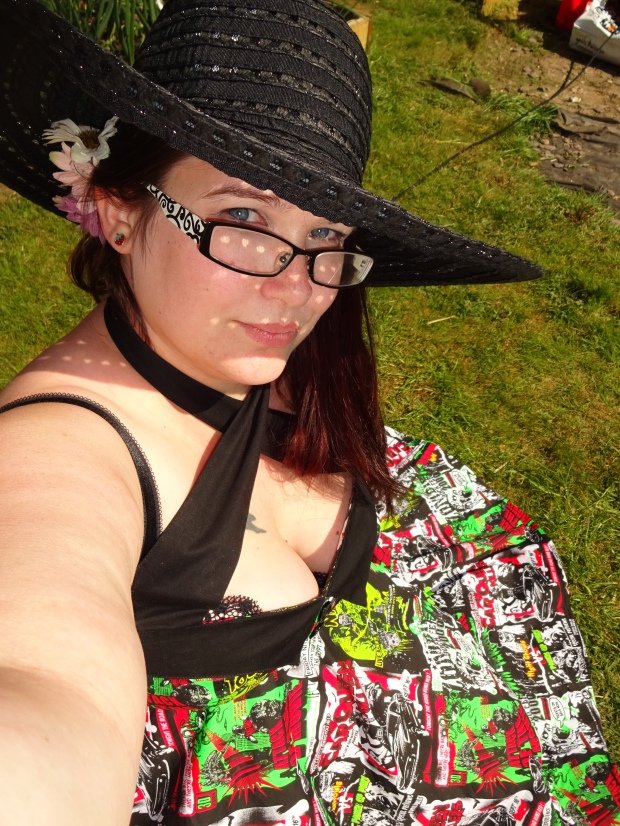 Let’s see what May brings now, and feel free to check my archive for my other April posts.

Sisterhood thanks to #PlusSizeWars and #WeAreTheThey

The Diet Industry and triggers